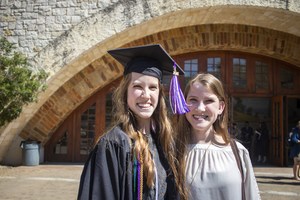 Four years ago, the Copeland twins faced a second significant separation in their young lives when Caitlin chose to attend college in Austin. The sisters had experienced their first separation at just 10 months of age; they were born conjoined.

From the point of surgical separation, the girls thrived while growing up in Houston. As seniors, they addressed Lutheran North High School graduates as co-valedictorians. Then, they faced a new reality together as their individual interests and academic ambitions led Caitlin to Concordia University Texas in Austin while Emily decided to attend the University of Houston.

“It was a big transition, especially because we had grown up thinking we would probably live together at college,” explains Caitlin. “So, we made plans to call each other often and FaceTime as much as possible the first year.”

Caitlin adds that testing her ability toward greater independence was especially important to her, and was probably made easier for her due to the very supportive and caring atmosphere at Concordia. She loved serving as an admissions tour guide and a student activities leader. “Helping to plan and run campus events and getting to brag about my Concordia experience to visitors really helped me come out of my shell,” she adds.

“I would tell prospective students that they should make themselves uncomfortable just one time and they would soon see how they could grow so much from the college experience,” Caitlin says “I guess that’s just what I did in going away to college. I believe that God chose this place for me to let go of the control so He could guide me.”

Appreciative of her own lifelong, small-school experience, Caitlin has chosen a career in private, secondary education. She has completed student teaching at both Concordia Lutheran High School in Round Rock and Redeemer Lutheran’s middle school in Austin.

“I value my students for what they know and how much they can teach me,” Caitlin explains. “That probably comes from the peer-to-peer relationships I have had with my Concordia adviser and professors, and from learning to share my faith with anyone.”

Interestingly, Emily missed Caitlin more at the beginning of college, while Caitlin’s homesickness mostly delayed until her junior year when she moved off campus. “I started to call Emily more often, and we would vent our frustrations with each other.”

About that time, Emily’s own university experience was taking off at the University of Houston. The restaurant and hotel management major became very active and even served as a teaching assistant for a semester.

“We thought that it was really funny that we were pursuing two different fields academically, but noticed that Emily took on a teaching role at one point and that I got into event planning on campus,” Caitlin smiles. “I guess we’re still a lot alike in many ways!”

Caitlin graduated in Austin on April 28. Emily’s graduation is in May. Depending on where the job opportunities take them, the sisters say they may very well get that apartment together.